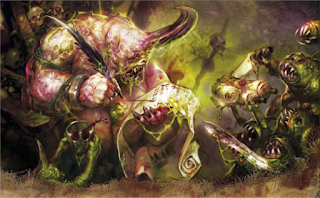 Ok so, the "slow month" of janurary was a bit of an under estimate of how slow a month can really be. Turns out the Open University has a thing called "deadlines" that I'm supposed to meet? Who knew! Anyway, on with the show.

February was a bad month for the Tallyman, Nurgle won't be bestowing any favours at this rate. Lets start with the good (ish)...

I started work on these guys! They're very much WIP at the moment, I think this is just after base coat and wash, so very early stages. I thought I'd get these guys done, because numbers 1,3 and 4 were part of the Colony 87 kickstarter, and with the dawn of the Return To Colony 87 kickstarter currently in progress, it's probably time to get these painted up. 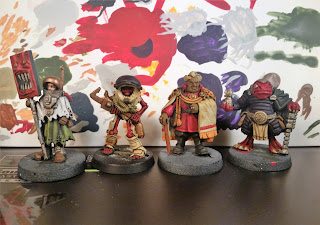 Ok, that's the positive side of the scales sorted. Now I'm sure that there's no way i would panic buy something that I've previously had no interest in, just because it was being discontinued... 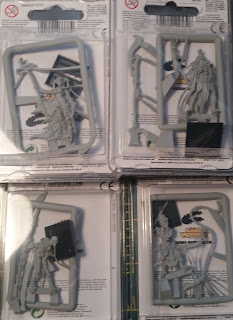 Ah, bugger. So anyway, the story is Games Workshop decided to discontinue the Tomb Kings. This move upset a lot of people, but it's kinda unreasonable for us to ask a company to keep stagnant stock around just so we won't miss it. So when the Red Sand Timer of Doom (tm) popped up, I had to take the plunge and pick up some of the models on the chopping block. I'm sure I won't regret this. 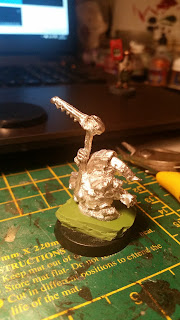 I also picked up this guy from eBay - I'm not going to lie, this was a 100% impulse buy. No idea on the range or manufacturer but it looks like a fun model, and I'm sure I can squeeze it into a chaos warband or something.

Ok so, two months down and the scores on the doors are currently at 2 Painted : 7 Brought. So my leadpile slowly rises. Hopefully I'll conquer it before it crushes me.