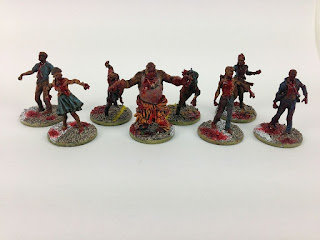 I've finished my first 8 Zombicide zombies - now I've just got the remaining 3 lots of 8. Then the other try of zombies. Then the survivors. Then the Abomination. Ok. Good thing no cool new toys have arrived for me recently...

Ok, a quick update on all the hobby goodness I've been getting up to recently;

I left off last time with the first batch of models spray base-coated... and that was about it. Well, since then I've painted on all the block colours - to speed things up i painted them in groups of 8, picking out one or two main colours to use with each group.

I also dipped all of the models and matted them down (which turned out to be more hassle than i expected) and highlighted them all up, see? It has been a productive week!


I also began painting the blood onto them using Tamiya Clear Red paint - love that stuff. 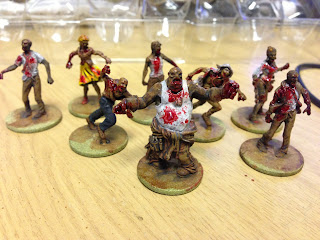 Once I've finished the blood, all I've got left to do is the bases and the first 32 are good to go! Hopefully I'll get them all done before the next Zombicide Kickstarter launches...

I love them. All GWs Nurgle stuff has been consistently brilliant.

The skull cannon/chariot I'm not sold on - I would of preferred the cannon to look more like the old Epic one (and I might model mine up like that anyway).

Slaanesh's offering is, we'll, just a big deamonette. Not much more I can add to it really... Except that it has stupid hair. 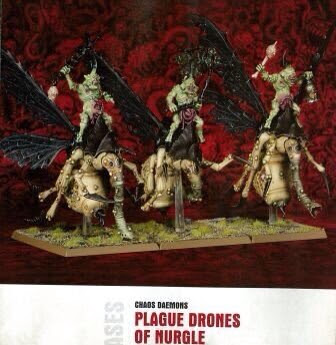 Posted with Blogsy
Posted by MJDredd at 08:26 No comments:

If the rumours (below) are true, I'm as excited as my wallet is worried - I've had some fantasy daemons up my sleeve for a while now (Skaven pushed ahead of them for a while) and these new releases might be the jump start my army needs, the Plague Drones seem very interesting indeed (here's hoping they're more like big Nurglly flys than FWs robotic cashew, as good as that model is its not very Fantasy).

These Items are highly limited, please request the quantity you require and we will supply you as close to this number as we can.

A deck of 21 cards that contains the 6 spells for the Lores of Tzeentch, Nurgle and Slaanesh as well as their signature spells

A deck of 12 cards that contains the Primaris powers and 3 Psychic powers for the Lores Tzeentch, Slaanesh, Nurgle as well

Posted with Blogsy
Posted by MJDredd at 12:37 No comments:

Recently, the vast majority of my free time has been dedicated to one thing: Zombicide. It's a pretty fantastic game really (some game balance issues aside). But one thing has been nagging at me, whilst it looks cool enough, it'd look cooler if the models were painted. - Uh oh.

So with that, I embarked on a quest to paint my way though my Zombicide box (all 70 or so models of it). But, to avoid me spending the rest of my life on this, I decided to try and speed-paint and dip my way though, and document my progress over the next few posts.

For the sake of my sanity I decided to break the painting down into three groups. Two sets of 32 zombies and the 6 survivors and Abomination.

But anyway, here's the progress so far:


In total this all, so far, has taken me about an hour - including drying times and test models, etc.

Well, that's all for now. I'll be painting these first 32 during my lunch breaks and free evenings - hopefully I'll have some more progress soon!

Posted with Blogsy
Posted by MJDredd at 04:59 No comments: