Mantic (and more) on Kickstarter 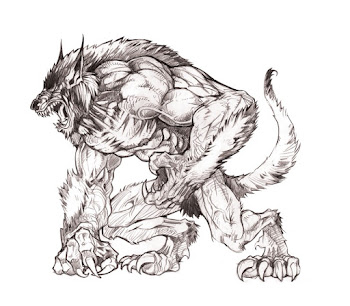 Over the weekend Mantic Games started a Kickstarter campaign to help them raise $5000 to fund tooling and the like to bring forward the release of some models (including the werewolves - left). Jumping forward to today, they're at $43,000 with some really cool stuff on the horizon (the fight wagons at 50k have some serious potential).

Check it out here

Aside from Mantic, Stuido Mcvey have started a Kickstarter to help production of Sedition Wars: Battle for Alabaster (think Space Hulk), which looks very nice indeed (the Strain models alone a cool enough) - $25 shipping to the UK is a little steep tho, now that it's funded I might just wait for its general release and pick up a copy.

Away from Kickstarter (but still with that Kickstarter feel) Avatars of War are going into the business of full armies and have launched a campaign on IndieGoGo to get a dwarf army into production (including dwarves riding war-bears) which sounds neat. They're only a day into their campaign and have already raised $2,600 of their $20,000 goal.

It seems like lot of the models they're wanting to produce will be in WarCast (their version of resin) and the last units they made in WarCast (Warriors of Apoc) suffered significant delays (they were released back at the beginning of the year and have only just started shipping out) due to unexpected demand. So it seems like further stressing an already stressed system wouldn't be a very good idea. That, and the fact that I'm not hugely interested in more dwarf models, means I'm going to watch this on from afar. Of course $20,000 would probably be enough for another spin-casting machine and operator (I believe WarCast is spin-cast) which could work though the backlog quicker.

In short, lots of nice things for the hobby coming soon!

Raise the white flag of war! 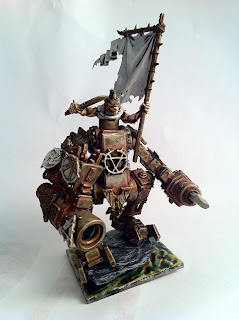 Finished my Warlord on Bonebreaker/Rat Ogre Masterbred for my Skryre Skaven. I'm quite pleased with how it turned out, the white is easier to do than i thought (and a lot easier than the previous yellow colour scheme). Now i just need to get these clanrats done....
Posted by MJDredd at 09:53 No comments:

Still painting this guy, I've gone for very sharp highlights mostly because it's easier, and I like the end result. Still got quite a bit to do yet, the trophy rack being the main thing.

Email ThisBlogThis!Share to TwitterShare to FacebookShare to Pinterest
Tags: Skaven

So, i've managed to tear myself away from Skaven for long enough to finish painting up this guy (Reaper Bones Ogre Chieftain) so i though i'd throw together a quick review to answer some of the questions i had about the Bones range of minis.

First impressions:
Now, this is probably the biggest thing people seem to want to know:  If you buy one of these expecting a plastic model, you're going to be sorely disappointed. It's probably more accurate to describe the material as a hard rubber, rather than a soft plastic. if you get what i mean.

The downside here is that, whilst minimal, mould lines will need to be 'cut' off rather than scraped. which can cause some problems. The detail is also a little soft in places (you can't see it that well in the picture, but the mammoth on the gutplate - parts of the front of it's head just kinda merges with the plate without any real defining line) but, for the most part, the detail is crisp and well-defined (the face on the club is a stand-out part of this model)

Hobby Prospects:
Reaper say that these models can be painted straight out of the blister without any priming or prep. I, on the other hand, primed my models using an airbrush with Vallejo Acrylic-Urethane Black Primer (because i'm all fancy like that) - i have read that some primers can react badly with the polymer ('never dry' badly, not 'explode, kill you' badly) but i experienced no problems whatsoever (i've also read that the Army Painter line of primers work fine, but i've not tried them out). The Main reason for priming, for me, was that the models are cast in white plastic, and i'm not a fan of painting over a white undercoat.

As for converting? I was left a little unimpressed. The problem i've had is back with the material again - it's a little too flexible to give you a clean cut with snips, so any clipped off bit need to be cleaned up with a knife - not a huge problem, but still an inconvenience. Aside from that, green stuff sticks to it fine (probably better than plastic, definitely better than metal) and super is your go-to type of glue.

Summary:
I feel that this review comes across as a bit negative, but i actually like these range of models (the Gnoll Warrior is a bit iffy, tho). Plus, that guy up there (if brought direct from Reaper) will set you back £1.62. So, while i'm not the type of person who defines quality by frugality it's very hard to argue with a nice looking model for less than a bottle of coke and a packet of crisps (or a single pint, depending on what you order). Like some of Mantic's stuff, i'm willing to overlook some minor issues if the price is low enough.

If i had to give the Bones range a rating out of 5, i'd probably give it a high 3.5 - it loses a couple of points because of the small issues i mentioned and the limited selection currently available (although this last point will be invalid once they start expanding) i'll be picking some of these up again in the future.
Posted by MJDredd at 10:11 No comments:

Wow, it's been a while. So, what have i been up to in my absence? Well, i (finally) finished painting my Abomination for my Skaven (no conversions this time around - but i do have something planned for the future). I haven't painted the eyes on the rat heads for a good reason, honest! (i'm waiting until i've practiced OSL some more) 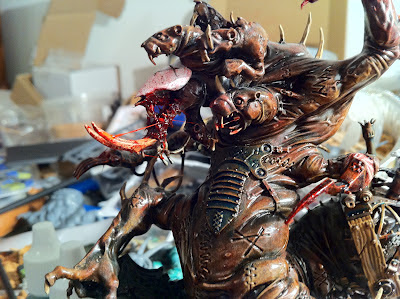 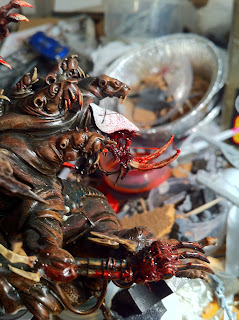 I've also been busy converting up some Mantic Dwarves into Chaos Dwarfs (i'm not using the Abyssal Dwarves for two reasons, firstly they're a bit too costly for what they are and secondly, i had these guys lying around.) - Ignore their current paintwork, it was from a very early experiment with dip. 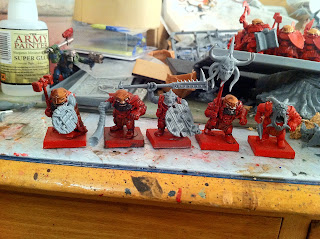 They're still very much a WIP - i've got a whole load of green stuffing to do once i've finished chopping bits off.

Got to get on with this painting, i keep writing up Daemon lists. Must. Resist. At least until I finish the rats.