First things first: New Daemons! Next month a whole load of Daemon models are getting a release (have Daemons finally gotten their, fabled, 'Second Wave'?). There's quite a few interesting bits to the release, but the thing that's caught my attention the most is the plastic Nurglings and Plaguebearers (finally...): 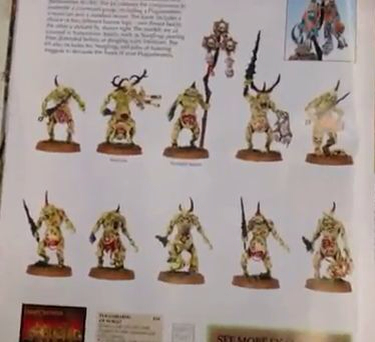 (I've not posted all the pictures since, by now, you can probably find them all over the blogs/twitter/BoLS)

From what I can see, i like the models. The Nurglings in particular are a nice touch (they look much more like the artwork now) but they might look a little samey if you have more than three tho (that does depend on how multi part they are). I'm reserving judgement on the Plaguebearers until I can see a higher quality picture (this Saturday).

Because I've only seen this posted on warseer, here's the full list of releases for August: 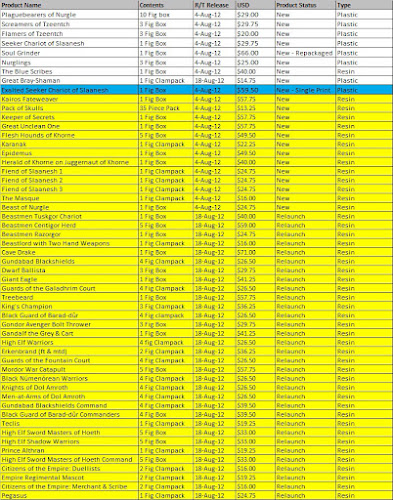 (as an aside, the last few scans from white dwarf have been released the Tuesday before the preorder opens - like clockwork. Can we all stop calling it a rumour leak? It's clearly an advertisement aimed toward those who like to think their 'in the know'. In this case, anyone who reads warseer. Myself included. And it works. Every time.)

In other news. My current fanboy flame, Reaper Miniatures, have gone and got themselves a Kickstarter to help produce their new Bones range. I'm already in for $100, but unlike some recent kickstarters (looking at you sedition wars) I'm probably not going to increase my pledge with the stretch goals. Of course, I remember saying I wouldn't be backing Sedition Wars, so who knows. 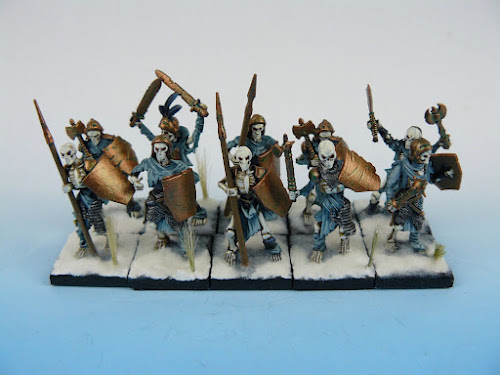 I've made a start on my Kings of War Undead army. I've just got some shield decals and the front two ranks last to do and this unit is done! Hopefully I can get these guys sorted before my kickstarter haul arrives.

When I started this unit, I didn't really like mantic's range of skeletons, but during the time it's taken to finish them, they've actually grown on me. Mantic's stuff in general usually takes a little while for me to come around to (except the zombies. They were amazing from the get go) - in general I like their stuff (it's like the old-school gw stuff, but in plastic), and the relatively low entry point (price wise) is always a plus.

Now I'm faced with a tough decision, do I start a veer-myn force now, or wait until the inevitable Warpath kickstarter.