Something plastic this way comes.

Ok, so i'm a little out of the loop here, but since i last checked, Reaper - through their Bones line - have started releasing models in plastic! For, like, pennies (well, hundreds of pennies) so i had to check them out. I ordered a Dwarf Warrior, a Ghost, and Ogre Chieftain and a Cave Troll all for under a tenner, delivered. Can't really argue with that, i'll post something like a review once they've arrived and i've messed around with them a bit (if i like them, their Kobold models may become my Skaven Slaves - £14 for 30 models delivered isn't bad).

Edit: Forgot to include a like to the Bones line on the Reaper site, here.
Posted by MJDredd at 11:21 No comments:

The rats need some firepower!

Started work on my Skryre WLC. Still got a ways to go - their skin isn't going to be that orange when I'm done.

I'm not dead! I've just been doing work stuff, the usual excuse (the blog i write for work is here. If you're into your eco and green and recycling stuff, check it out. If not, dont?)

I was at Salute 2012 this past weekend tho, so i did do that. Which is why i'm currently suffering from, what i'm going to term, a 'spending hangover'. But i enjoyed myself and will definitely be going again next year (if only because you sometimes need to see things in the 'flesh' to really appreciate them). But i did learn some valuable lessons;

1. Plan who you want to see and stick to it. Also, pace yourself (spending wise).
2. London traffic is manic. Especially the day before the marathon.
3. Don't bother with Forgeworld. You'll be more relaxed and Gamesday is only 6 months away, they'll show off more then.
4. Don't trust your sat-nav. It really wants to show you all the sights of london (and i mean all. Up close. I was worried at one point that i'd see through the Queens bathroom window and get executed for treason).

My pick of the weekend is this guy: 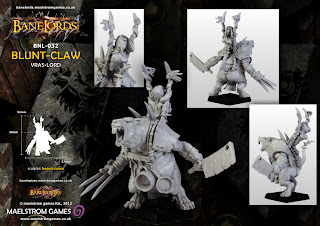 Maelstroms BaneLord Blunt-Claw. Fantastic model. and Huge! It's hard to tell from the picture, but he only just fits on the 20mm base. He (and he is a he. Ref: Rat Balls) towers over almost any other Skaven model (only the Abomb and Rogres are bigger, and the Ogres are only just bigger). Probably the best warlord model i've seen in a long time. And i have him! Three months early!

Sometimes i have to restrain myself from just buying the entire BaneLegion line, Salute was one of those times. They've got a load of ex-Rackham guys making models for them, and it shows (i also love all the old Rackham models). I just hope they release more Under-Vermin, and Snake Men.

Also, Black Scorpion have some awesome Pirate Orc models (with a Pirate Giant!) which are probably going to be my next army.

Over the weekend I got a bit bored, so I knocked up some plague Servitors for my Nurgle Squats, mostly by rolling plastic glue in my bits box.