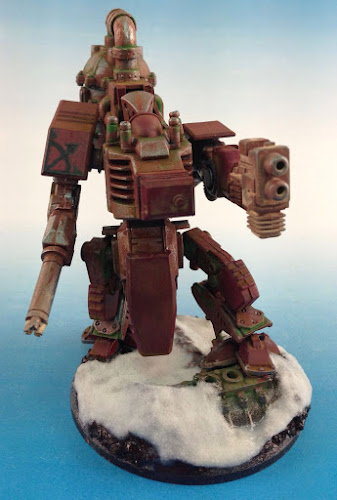 Ok, so my Stalk Tank is a little different from others. And I have a very good and fluff reason for that (or, rather, I had the model and it was already base coated). It's based off of a AT-43 Cog Prowler, all I've added is the tanks at the back to make it look a bit more grimdark gothic. This is also the first outing for the the snow basing I'm doing for these guys - I'm quite happy with the... Erm... 'Melty' effect that water effects gives you.

Also, as an aside, the mould lines on these models are horrendous! And, because of the material they're made from, almost impossible to remove.

From now onward ive re-jiged my hobby budget allowence (to force me to paint more). So now the money I have available to spend is:

So currently I've sold one guy, and painted three, with a total value of £41.19 (this new guy weighs in at £7.50). I've brought no new toys and I've not painted a group of 5 (such as a squad or a rank, not 5 individual characters). So the total available to me now is £20.60. Hopefully this new system will make painting groups of lower value models more worthwhile.

Posted with Blogsy
Posted by MJDredd at 04:45 No comments:

Email ThisBlogThis!Share to TwitterShare to FacebookShare to Pinterest
Tags: Hobby Diet, Lost and the Damned

Finished the first deamonhost for my LatD. Well, I say finished. I still haven't settled on a basing scheme (I'm thinking snow basing).

Anyway, the nearest equivalent for this guy is the standard GW deamonhost, which currently costs £7.70. Which sets my current running total to £33.69, so I'm doing quite well. Hopefully onto some cool stuff soon!

Posted with Blogsy
Posted by MJDredd at 04:45 No comments:

Email ThisBlogThis!Share to TwitterShare to FacebookShare to Pinterest
Tags: Hobby Diet, Lost and the Damned

Lost and the Damned Arch Heretic

Lost and the Damned you say? Didn't I just say I was cutting down on my spending? Well, yes. But the thing is, I've been very interested in putting together a LatD army for a good while and my copy of Dark Vengeance has been sitting around feeling rather unloved. On the upside, I've knocked together most of a 2000 point army from spares and conversions and the like. Like a free army. Well, not free, since I did pay for it all at some point but still...

Anyway, all that talk leads to this, the first painted model for my Lost and the Damned force, my Arch Heretic. They way I envision LatD is a collection of the dregs of society - so it's all zombies, mutants, pirates and cultists lead by someone who thinks himself a little too good to be in the gutter (like a fallen nobleman or some sort of rogue inquisitor); 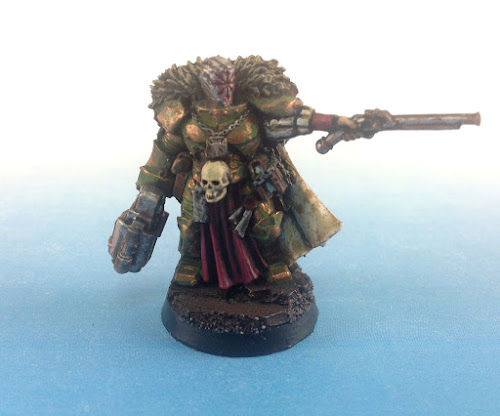 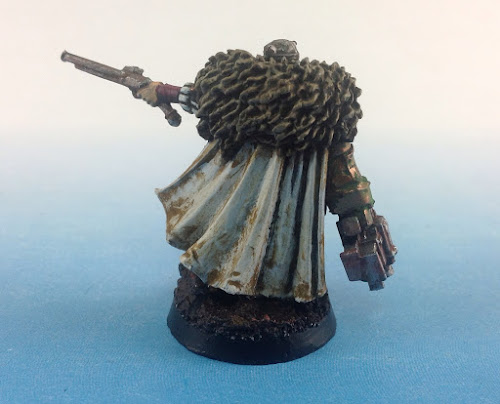 This models made from an old Inquisitor Corteaz model I got in a bitz box. With the head of the Dark Vengeance heavy weapon cultist and a terminator bolt pistol and empire outrider pistol. I'm quite pleased with how he turned out and, since this is my only fawtykay army there's a good chance these guys are getting some neat backup in the form of a Titan in the near future. Sometimes it pays to align yourself with the dark gods.

And, as I laid out last time, this guy counts as £11 toward my Hobby Diet (I still can't think of a better name), so the current total is:

So I've now got £25 to spend toward new toys! And yes, I did see that GW forgot to include plastic Dragon Ogres in their WoC splash release, what's up with that? Anyway, I'd best get back to painting. If they ever release plastic Battle Sisters ill drive right up to Nottingham and just start throwing my money at their giant Spess Mahrine statue. So I'd best start saving now.

Posted with Blogsy
Posted by MJDredd at 11:06 No comments: