So, this year started with everyone cautiously excited about the new edition of Warhammer Fantasy. Then proceeded into rumours of round bases started popping up, which were only stoked by pictures from Warhammer World, with Lizardmen on (gasp) ovals. People thought that it truly was the End Times. Then it hit. The Age of Sigmar.

GW had committed heresy! They made the rules free, and quick to learn! They introduced a new chapter of Space Marines! They also committed the gravest of sins, they advanced the storyline! The sky was truly falling!

Ok, jokes aside. The release of AoS was a big deal this year in the hobby. If only for the quantity of "power gamers" who Rage Quit the game, but - controversial opinion - did the hobby really lose anything with these players quitting? Mantic's Kings of War better be on top form in 2016, because if a significant portion of your player base is people who rage quit another system, they're not going to give you any leniency.

I must admit, I was sceptical at first - as you can probably see from any of my posts about AoS leading up to the release. But I've been converted, I think that the modelling freedom that round bases offer offsets the "loss" of our precious block formation. I've even started two warbands for the game: 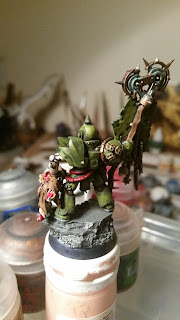 Of course, the Age of Sigmar wasn't the only headline this year. The other big news of 2016 was the fulfilment of Kingdom Death: Monster.

I received my copy, and let me tell you, it's a nice kit. I'll look at it a bit more in-depth once I've cleared my current hobby waiting list.

But that wasn't the only Kickstarter project of 2015. The last year has been a good one for Kickstarter Projects, possibly better than the "golden age" of a couple of years ago. There were so many cool projects, it was actually quit difficult to choose which ones to back. In the end I threw my lot in with:


Just from that list I have more than my fill of New and Old School miniatures, as well as boardgames and just whole armies/warbands/gangs that I can sub into various systems/settings. Between the Deadzone and the Warpath Kickstarters I've got a decently sized Veer-Myn force coming my way. Hopefully I can work my way through my leadpile and I can actually paint and show off some of the new stuff that's already arrived (more on that later).

Looking forward, the upcoming Kickstarters is even more exciting. We have the thinly-veiled secret that is the next Mantic Kickstarter (Pssst... it's probably Fallout Warfare), and the upcoming Pantheon of Chaos Kickstarter (from Diego Serrate, the mind behind the Space Raiders), all the way to whatever CoolMiniOrNot have planned (if I was a betting man, I'd have my money on a plastic box release of Dark Age or the much-anticipated Confrontation Phoenix - but then I bet on those two every year).

Ok, I'm running out of space here so I'll cover my New Years Hobby Resolutions in another post. But until then, have a happy New Year!
Posted by MJDredd at 10:31

Email ThisBlogThis!Share to TwitterShare to FacebookShare to Pinterest
Tags: year in the hobby